The Department of Labor’s two most recent FLSA opinion letters offer instruction for determining minimum wage and overtime compliance and the scope of the statute’s ministerial exception. 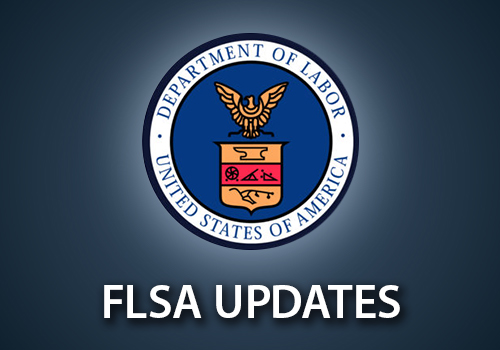 FLSA 2018-18 addresses an inquiry from a home health care provider who sought the DOL’s opinion on whether his or her employer’s compensation plan was compliant with FLSA minimum wage and overtime requirements for employees with varying average hourly rates. The employer’s compensation plan compensated employees by multiplying the hours spent with clients by the hourly rate, then dividing the total by the hours spent with the client and spent traveling to and from client locations. The amount was then compared to federal and state minimum wage requirements to maintain compliance, which the DOL found sufficient under the FLSA.

The DOL did take issue with the employer’s overtime practices. The compensation plan provided that an employee working over 40 hours in a given week would be paid time and a half using the rate of $10.00 per hour. The DOL concluded that the employer’s overtime practices could potentially violate the FLSA because the regular rate of pay must be calculated using regulatory formulas and not by an arbitrary rate set in an employment agreement. The employer’s compensation plan would comply with the FLSA for overtime payment of employees whose actual regular rate of pay is less than or equal to $10.00; however, the employer would risk violating the FLSA for employees with regular rates of pay exceeding $10.00 per hour.

The second FLSA opinion letter, FLSA 2018-29, addressed the scope of the FLSA ministerial exception for members of an “egalitarian religious commune.” The opinion letter concluded that the members were not subject to the FLSA because their activities did not resemble a “traditional employment paradigm” under the FLSA. The DOL noted that the “members do not work at a for-profit enterprise and do not expect to receive compensation in exchange for their services,” and were subsequently not covered by the FLSA. The DOL added that these two factors were “relevant regardless of whether the members’ motivation to live in this manner is based on a religious conviction, as here, or on a secular ideology,” they chose to provide their services free of coercion.

Additionally, even if the members were considered employees under the FLSA, the DOL concluded that they fit the requirements for the ministerial exception. There is “no rigid formula” to determine if an individual or entity qualifies for the ministerial exception, but the DOL looked to the “members’ way of life” that resembled a monastic community expressly entitled to the FLSA exception. The community members working for the “nonprofit, income-generating ventures” were also entitled to the exception because the DOL considered the work to be “an inextricable part of their religious communal life,” similar to Salvation Army ministers that have previously been entitled to the FLSA exception.

The DOL concluded that even if the income-generating ventures were considered FLSA enterprises, it did not “transform the community members into employees under the FLSA.” To do so would “improperly extend” the FLSA over various “volunteer, religious, and other activities” that it does not apply.” Furthermore, the DOL’s opinion is similar to the WHD’s previous confirmation that the FLSA did not apply to individuals volunteering their time to “religious, charitable, civic, humanitarian, or other organizations as a public service.”

The recommendations provided in DOL opinion letters regarding FLSA compliance are useful tools for employer compliance. Here, the DOL’s assessment of the scope of the ministerial exception would apply to both religious and secular organizations depending on the volunteer nature of the organization’s policies and practices. This opinion provides considerable leeway for employers seeking the FLSA ministerial exception, in agreement with the WHD’s opinion letter on the topic.