Should employers rejoice under a new EEOC Chair? Maybe. Acting Chair Victoria Lipnic discusses what is to come from the EEOC under a new administration and new agency leadership. Less may change than employers think. 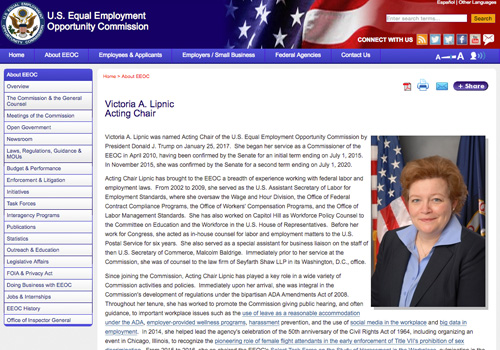 Acting Chair Victoria Lipnic recently made her first public appearance since being appointed the new head of the Equal Employment Opportunity Commission (“EEOC”) by President Donald Trump on January 25, 2017. Lipnic attended a labor and employment conference in Chicago to discuss present and future matters of the EEOC. Prior to her appointment as Acting Chair, Lipnic served as an EEOC Commissioner for two terms, earning the reputation for working well with both Republican and Democrat Commissioners. Lipnic also stood apart, as she voted against several high profile EEOC Guidance Opinions, such as the EEOC’s view that Title VII of the Civil Rights Act of 1964 includes sexual orientation as a “protected class.” She also recently voted against the newly modified EEO-1 reporting standards requiring employers to provide the EEOC with employee compensation data. With Lipnic’s appointment as EEOC Acting Chair, employers, corporate counsel and their outside counsel are all hopeful for more employer friendly policies and outcomes under this new administration. In Chicago, Lipnic discussed the future of the EEOC under President Trump, EEOC’s 2016 year-end summary, and the future of the EEOC’s updated Strategic Enforcement Plan, Fiscal Years 2017–2021 (“SEP”).

Throughout Lipnic’s conference discussion, Lipnic emphasized employment opportunity and opportunities for the EEOC to refocus on economic and job growth going into the future. While Lipnic indicated that there is no reason that the EEOC’s mission be at odds with employers’ point of view, she also cautioned that the EEOC is still an enforcement agency, whose mission “to enforce civil rights laws in the workplace” will largely remain the same under the new presidential administration. However, the EEOC’s refocus will be on President Trump’s interest in expanding jobs and growing the economy. Lipnic further stated that she is committed to enforcing issues of equal pay and age discrimination in the workplace, suggesting that age discrimination will receive highlighted treatment in 2017. Of note, enforcement of equal pay is also a priority under the SEP, and the Age Discrimination in Employment Act (“ADEA”) celebrates its 50th Anniversary in 2017. Additionally, Lipnic stated that the EEOC is committed to harassment prevention in the workplace, and the Agency will issue Proposed Enforcement Guidance on Unlawful Harassment following an extended public comment period after March 2017. Continuing, Lipnic showed interest in exploring alternative harassment prevention routes, such as bystander intervention and civility training.

In addressing the EEOC’s 2016 performance, Lipnic highlighted the volume of resources spent on systemic, nationwide class action suits as compared to individual or regional lawsuits. Lipnic pointed out that perhaps a more strategic allocation of resources should be made to individual or regional cases rather than nationwide class actions. Lipnic emphasized that the public impact of individual or regional cases could be just as great as larger class actions, and the strategic shift would could be less taxing on EEOC resources. Lipnic also addressed her opposition to the newly adopted EEO-1 employer requirements. Specifically, Lipnic said that requiring employers to provide employee compensation data is not a modern solution for modern problems with pay discrimination based on gender, race, and ethnicity. She stated that she would like to reevaluate the costs and benefits of the added regulation and to discuss alternatives with her colleagues at the EEOC. Lastly, Lipnic voiced concern regarding the revised SEP. She addressed the EEOC’s priority regarding “complex employment relationships,” (a.k.a joint employment relationships), suggesting a potential shift in this enforcement and litigation priority. Further addressing the revised SEP, Lipnic asserted that the Commission should be voting on what matters the EEOC litigates, rather than delegating selection to EEOC General Counsel, which has been the practice for the last seven years.

Overall, Acting Chair Victoria Lipnic foresees that more enforcement will remain constant rather than change under a new presidential administration. However, new issues of priority will take shape with time and patterns of enforcement will evolve. As Lipnic stated, this does not mean that the EEOC’s mission to enforce civil rights in the workplace will drastically alter or disappear regardless of a pro-job growth agenda.

Although strictly forecasting at this early state, enforcement changes of the kind discussed above are likely to occur over the course of the administration and benefit employers in the future.