Employer May Not Prohibit Employees from Wearing Buttons or Pins, Says Fifth Circuit

The Fifth Circuit upheld the National Labor Relations Board’s decision against In-N-Out, which found the company’s rule prohibiting employees from wearing any type of pin or stickers on their uniforms unlawful. 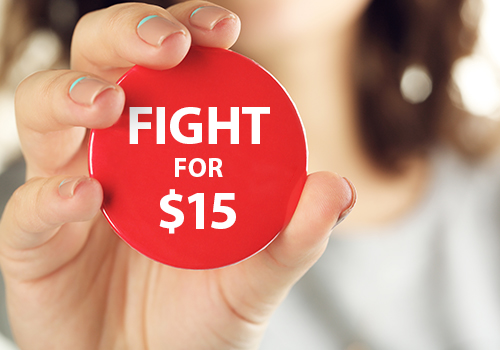 Several In-N-Out employees began to wear “Fight for $15” buttons (in reference to the movement advocating for a $15 per hour minimum wage) on their uniforms during work. In-N-Out Burger v. National Labor Relations Board, No. 17-60241 (5th Cir. July 6, 2018). One instance of an employee wearing the button was brought to the attention of the store manager, who instructed the employee to remove the button, arguing that it violated the company’s uniform policy. In-N-Out prohibited employees from wearing pins or stickers, except for a Christmas button during the holiday season and another button soliciting donations for the company’s foundation during April.

In response to unfair labor practice charges filed against In-N-Out, the NLRB’s General Counsel determined that the no pins or stickers rule violated the National Labor Relations Act (NLRA). Section 7 of the NLRA protects the rights of employees concerted activity, organize, and bargain collectively while Section 8(a)(1) prohibits employers from adopting workplace policies that interfere with, restrain, or coerce employees in their exercise of these right. Courts have held the NLRA protects an employee’s right to wear buttons, pins and stickers that relate to the conditions of their employment or other protected matters. Such a rule that bans employees from doing so is presumptively invalid. There is a narrow exception to the general unlawfulness of such rules, however, if an employer can demonstrate certain “special circumstances” outweigh the interests of the employees.

This special circumstances exception is only recognized in a limited number of situations, such as where permitting the wearing of pins would (1) jeopardize employee safety; (2) damage machinery or products; (3) exacerbate employee dissension; or (4) unreasonably interfere with a public image that the employer has established. An employer must put forth substantial, non-speculative evidence of the circumstances that justify its restriction.

An administrative law judge rejected In-N-Out’s argument that the rule was justified due to its interest in maintaining a unique public image and to food safety reasons and found that the company had committed unfair labor practices. The NLRB adopted the judge’s findings, and subsequently, In-N-Out petitioned for review of the Board’s decision.

In reviewing the Board’s decision, the Fifth Circuit noted the scope of the public image circumstance was narrow and that an employer’s requirement to wear uniforms or adhere to a dress code, an employer’s status as a retailer or service provider, or the possibility that customers might be exposed to or offended by the protected items, are not alone sufficient to justify special a rule prohibiting buttons or pins. The Fifth Circuit held that In-N-Out did not meet its burden in establishing that its interest in protecting its public image constituted a special circumstance. Additionally, the Court found the Company’s requirement that employees wear a Christmas button and donation button, both of which were larger than the Fight for $15 button, undercut the Company’s argument that it was attempting to maintain a “consistent” public image.

In-N-Out also attempted to argue that the Fight for $15 buttons threatened food safety as it was small and could fall unnoticed in customers’ food. The Board, and the Fifth Circuit, also rejected this argument. First, the rule banned all pins and stickers without regard to their safety. In-N-Out also made no attempts to examine the safety of the buttons before banning them. Thus, it did not show a special circumstance which could justify the ban against all buttons and pins.

Companies are commonly concerned with their public image or appearance, especially those with employees who interact with customers or the public on a regular basis. Indeed, companies often have a uniform or other dress code in place to maintain a certain image. But, in placing restrictions on employee’s uniform and dress, employers should be cautious about outright banning buttons or pins, as this could be seen as a violation of the NLRA. If employers do maintain such a ban, they should be prepared to justify it with concrete reasons that would qualify as special circumstances under the NLRB’s test.