It is essential for employers to understand that how and when they inquire, evaluate and investigate employment eligibility is every bit as important as ensuring that they do so to begin with, as new federal guidelines clearly demonstrate. 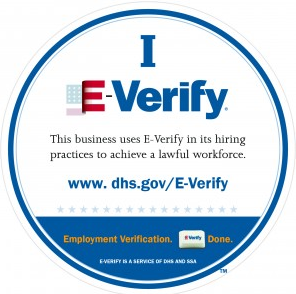 New federal guidelines may actually put employers in an ongoing catch-22 over employing persons who are not eligible to work in the United States.

The U.S. Department of Justice (DOJ) and U.S. Immigration and Customs Enforcement (ICE) issued a memorandum in late 2015 that established guidelines for what employers may and may not do to determine if an employee is, indeed, authorized to work in the U.S.

With these four points in mind, the joint DOJ-ICE memorandum seeks to address questions relating to audits or investigations of eligibility for personnel after they have been hired, i.e. determining whether or not a person is eligible to be employed on the basis of concerns or issues that arise post-hire. Performing such activities after an employee is hired comes with very high risks, as the federal government views the Form I-9 and E-Verify processes as essentially one-time steps that should be taken during the hiring process.

Under the new guidelines, employers are reminded that inquiring about or researching an employee’s citizenship status or national origin can constitute discrimination under INA. The guidance also reiterated that E-Verify is not to be used after a worker is hired, and that if an employer discovers what they believe to be ‘faked’ documentation after an employee is hired, they cannot (or should not) necessarily act upon it.

One example is that if an employer believes that a worker is presenting a fake document or a fraudulently obtained document, the employer must give the employee the opportunity to present a different document but may not specify which of the approved document options that should be.

This becomes complicated because the list of approved documents includes many obscure options that employers may not be familiar with, such as a Native American tribal card. Should a manager tell an employee that he or she is not familiar with the document presented and requests a more familiar document (such as a driver’s license), that can be grounds for a finding of discrimination.

Another challenge is inconsistency in the employment eligibility verification process. In a September 2015 finding, the DOJ fined Nebraska Beef Ltd., a meat packing concern, for $200,000 because it was determined that the company required non-U.S. citizens to provide more stringent documentation verifying their eligibility to work in the U.S., in comparison to the procedures used for U.S. citizens.

And yet, employers can also be found liable for employing an illegal immigrant “knowingly” — and under federal law, ‘knowing’ means both having actual knowledge, and operating under conditions in which the knowledge should be able to be fairly inferred. Nearly 2,000 companies per year have been audited by ICE over the last eight years on average, indicating that federal enforcement actions against employers are just as stringent on the compliance side despite the increasing focus on discrimination enforcement at the same time.

It is essential for employers to understand that how and when they inquire, evaluate and investigate employment eligibility is every bit as important as ensuring that they do so to begin with. Sloppy, inconsistent or well-meaning but ad-hoc approaches to pre-employment eligibility verification or post-employment reviews of the same can land employers in hot water with the federal government.

Fair or not, the fact is that employers are legally obligated at the same time to only employ persons legally allowed to work in the U.S., and carefully limit the nature, format and timing of their questions and research activities associated with this compliance. Employment policies and procedures should be reviewed to ensure compliance with both mandates in the pre-employment and post-employment aspects of eligibility verification alike.