Published by Eric A. Welter and Megan M. Carboni on February 6, 2018

A brief summary of employment laws enacted in 2017 affecting employers in the DMV area. 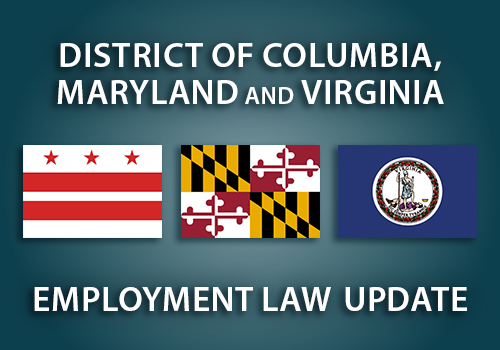 Traditionally more conservative in these areas, Virginia did not enact mandatory paid sick leave legislation or increase the statewide minimum wage in 2017. Currently in its 2018 legislative session, the Virginia General Assembly will consider bills proposing both paid sick leave and increases in minimum wage from January 2018 to April 2018. Virginia did, however, mandate that employers and payroll service providers report all breaches in payroll data to the Virginia Office of the Attorney General. Additionally, the Virginia Commissioner of Labor and Industry may now assess nearly double the civil penalties for Virginia Occupational Safety and Health violations. Additionally, former Virginia Governor Terry McAuliffe signed the Executive Order mandating that all future state contractors with the State Executive Branch must agree to a non-discrimination policy that includes non-discrimination based on sexual orientation.

In addition to the above mentioned, there were workers’ compensation updates, state occupational safety additions, data security improvements, and prohibitions on employers’ use of prospective or current employees’ credit information all in 2017. Check out the 2017 Law Update here.